Just yesterday I was remarking on Twitter about how I wished that the BBC would put out a press release with some details about the filming that was set to begin this week.

Set reporters were out and about and several sneaky pictures of sets being dressed had shown up on social media, but it was getting very difficult to separate fact from fiction on the #dwsr hashtag. It seems as the show gets more popular, there are more people trying to make a name for themselves by starting false rumors and claims. It is becoming more and more difficult to cut through the noise. But some of the info coming out is in fact correct and it is my opinion that the BBC needs to get ahead of the news cycle and trickle out as many acts and photos as they can. This will not only keep a lot of rabid fans at bay, but also allow them to have better control over the conversations, and of course speculation, that will occur.

Today’s press release does some of that well and some of that poorly. In it we get details of the first two episode being shot which, rather un-traditionally, also happen to be the first episodes that will air. As well as the first (pretty underwhelming) photo of Peter Capaldi and Jenna Coleman shooting the new series of the show in the same clothes we last saw them in. Here is the photo (click for larger version) and the full press release: 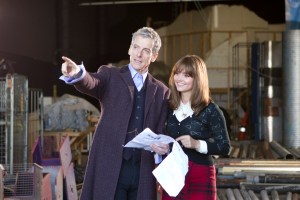 On the heels of the Doctor’s recent regeneration, BBC AMERICA has released the first image of the Twelfth Doctor, Peter Capaldi (The Thick of It), who stepped on set today for his first full day of filming for season eight of the hit series. Capaldi made his first appearance as the Doctor in the show’s 50th anniversary special, The Day of the Doctor, before formally taking over the iconic role in the 2013 Christmas special. Starring alongside Jenna Coleman (Death Comes to Pemberley) as companion Clara, Capaldi will next appear in season eight of Doctor Who, which premieres later this year.

“New job, first day, slightly nervous. Just like the Doctor, I’m emerging from the TARDIS into a whole other world.”

“First the eyebrows! Then, at Christmas, the face! Coming soon, the whole Doctor. In the Cardiff studios, the Capaldi era begins.”

The first episode of season eight is written by Steven Moffat with the second episode penned by Phil Ford.  These are the first episodes Peter will shoot and are directed by Ben Wheatley.  Filming is taking place in Cardiff until August 2014.  Doctor Who is executive produced by Steven Moffat and Brian Minchin, and produced by Nikki Wilson and Peter Bennett.  It is a BBC Cymru Wales production.