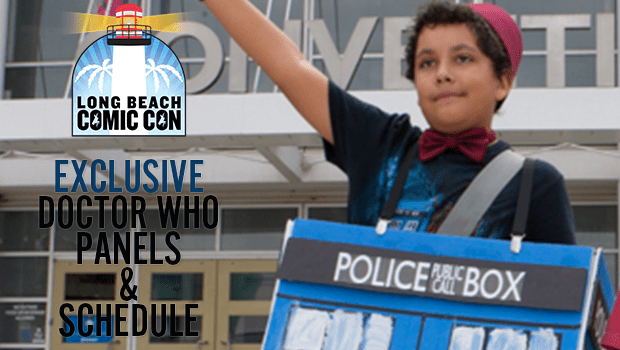 Long Beach Comic-Con is one of our favorite conventions here at AMMWAB and not just because of the great Irish pub across from the convention center (The Auld Dubliner). LBCC tends to be one of the more relaxed conventions that we have the pleasure of attending. The crowds are nice, the dealer room is great, and there are lots of spots to take costume photos. So we were already happy to be attending the next convention taking place at the Long Beach Convention Center on Saturday 17 Sept from 10-7 and Sunday 18 Sept. from 10-5. Now though we are excited.

LBCC has announced that in addition to the usual programming at the Long Beach Convention Center they will also be taking over the (very appropriately named) Cardiff, Long Beach Public Library Auditorium for all of its Doctor Who programming on Saturday. Here is the rundown of panels:

There’s more to British science fiction than just Doctor Who, and if you’re interested in seeing what other scifi and fantasy TV series that damp little island has to offer we’ll be discussing and recommending shows that’ll be right up your alley – AND telling you where you can watch them!

Saturday, 12:30pm-1:30pm
History of TARDIS props
A discussion of the history of Tardis props, including the restored 1996 TV movie TARDIS console (the only original TARDIS prop in the united states!).

Saturday, 1:30pm-2:30pm
Doctor Who LIVE!
Panelists: Robert Chan, Peter Fluet, Aaron Ganser, Gina Ippolito, Markeia McCarty, Gian Molina, Frank Moran, Andrew Pish, Lauri Roggenkamp, Chris Thompson, Clint Verner, Andrew Wollman
Doctor Who Live is a group of comedic actors that improvises a complete, 45­minute episode of “Doctor Who” with made­up, non­canon Doctors, companions, and enemies. The only thing we know before the show starts is who’s playing the Doctor and companion — that’s it! We begin bytaking a suggestion from the audience to create a title that will inspire our fully improvised episode of “Doctor Who” – never before seen on TV or stage and never to be seen again!

Saturday, 2:30pm-3:30pm
The Pseudoscience of Doctor Who
Panelists: Justin Daube, Claire Berry Gardner
Is Time Travel possible? How can you fit an infinite space inside a Police Box? How would humanity actually respond to an invasion of shop window dummies? Join Order of Gallifrey’s roundtable of engineers, psychologists, and mad scientists to discuss where the science ends and the fiction begins for the good Doctor.

Saturday, 3:30pm-4:30pm
“My Nerdy Year” Live!
Panelists: Lauren Peck, Bridget Bowes, Cherry Chevapravatdumrong, Ben Paddon
For the first time ever, the podcast “My Nerdy Year” will be recorded in front of a live audience! Join Dan Peck as he hosts his very first convention panel, where he and his panelists revisit one of their favorite topics, “Doctor Who!” Not only will this be a celebration of our favorite Time Lord, but it will also serve as the basis for a future “My Nerdy Year” episode, “Our First Panel!” That’s like being in two panels at once – how appropriately timey-wimey! Plus, as always, there will be a “Big Question,” but this one is so big, we’re going to let the audience answer it as well!

The MadMan crew and Team TARDIS will be there in full force. If you see us be sure to say hi!