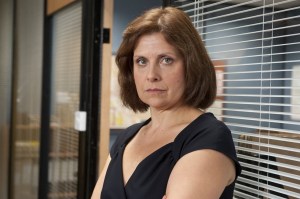 BAFTA winning actress Rebecca Front who starred alongside Peter Capaldi as Nicola Murray MP in series 3 & 4 of The Thick of It is set to appear in series 9.

According to the BBC, Front will be appearing in the currently shooting 2-part episode that also features the return of the Zygons, UNIT, and fan favorite UNIT scientist Osgood.

Surprisingly this is Front’s first appearance in Doctor Who. The episodes currently shooting are from a script by Peter Harness and also feature Vanessa Redgrave as Kate Stewart, Ingrid Oliver as the aforementioned Osgood, and of course Jenna Coleman and Peter Capaldi as Clara and the Doctor.